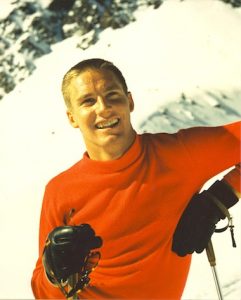 trying to outrace an avalanche in the Swiss Alps on April 12, 1964.

A native of Steamboat Springs, Buddy had a breakneck style which caused spectacular spills, but also enabled him to win virtually every championship available during his mercurial career. He was America’s first truly world class ski racer.

Among his accomplishments were:

To help the participants of our Buddy Werner League learn more about Buddy Werner, an Integrity Program was implemented this year called Werner Wisdom.

Each non-race day our coaches speak to our skiers about one of the following themes:  Safety, Sportsmanship, teamwork, Integrity, Hard Work, Adventure and Humility.  They tie these themes into the sport of skiing and racing.  Our hope is that we can pass on the Buddy Werner Legacy to our participants and that they think of Buddy and all that he did for the sport of skiing.